My adventure in the Windy City began with hot pink toenails. (Stay with me.) Sister Laura, who has worked so hard with little credit—editing, designing the original awesome cover, marketing, and supporting me every step—really wanted us to go to Chicago to receive one of the awards for my latest novel (Angels at the Gate) a story about the wife of Lot. I should say “our” novel. She also wanted us to attend the BEA (Book Expo America).

Pedicure, at least, called for, right?

But a few days before our flight, Laura fell and hurt her ankle. BEA requires lots of walking about, so she borrowed a wheelchair from a thrift store. It was old, heavy and squeaky, and not knowing its history, she cleaned it with Lysol, which set off the explosive substance detector at the airport. So, wheelchair and Laura, and all of her stuff had to be searched. After that,no problem, other than the wheelchair not showing up at the gate as promised. Eventually we found it in baggage. Piece of cake. We are over the hump. All we have to do is get outside the terminal because Laura has arranged for her friend, Bob, to pick us up.

Bob, it turns out, is 82 years old and doesn’t see well. (Really?) His car is about the same age and smells strongly of gasoline. (Really? Are we going to explode? I have visions of someone in front of us throwing out a lit cigarette.) Bob piles empty boxes on top of the luggage in the back. I politely mention that the boxes totally block his vision on one side. As he pulls out into the rain and jam-packed Chicago airport traffic, he nonchalantly replies, “I’m used to it. ”

I text our hostess. *If we survive Bob, will be there soon.*

Miraculously, Bob gets us where we are going, an area several miles north of Chicago in Edgewater, where we have rooms at a friend’s cousin’s lovely condo.

That night is the award event. We forgo a taxi because we are so far away, but leave the condo early, me pushing the squeaky, cumbersome wheelchair that randomly applies its own brakes down the sidewalk. Laura has called the Chicago Transit Authority, who assured her that ALL the metro train stations are handicap accessible. And, indeed, when we arrive at the nearest station, we find  there is a way to get a wheelchair into the station. But “handicap accessible” does not stretch to having an elevator to get up the many stairs to the subway platform.

Reversing course, we head to next station down the line, which has an elevator where we meet a nice young man with the Chicago Transit Authority who helps us up to the platform. I ask his name.

My first thought is how appropriate—the name of my book!—and he was indeed an angel. WAIT! The name of my book. . . . OMG, I have forgotten a copy of my book (necessary to hold when getting picture taken at awards. The last thing our publicist said was, “Don’t forget a copy of the book for the photo.”) I leave Laura on platform with Angel, hurrying back to the condo. By this time, my feet are aching in my boots (which I am wearing because my skirt rises too far in front for knee-high stockings, and I will die before pantyhose.)

I grab a copy of my book and switch my boots for sandals. Still have on black socks, because this is Chicago, not Birmingham. I look down to see two bright pink big toes peeking out through holes in the socks.

Whoops, sandals not going to work. I grab boots for later donning. By the time I get back, we are pretty late. Angel gets us on the subway, but fails to show us how to lock in the wheelchair. Although she has the brakes on, they are not that spiffy. At first lurch, Laura rolls down the aisle, and I am running after her trying to catch her before she crashes at the other end.

A second angel jumps up from her seat and shows us how to lock in the wheel chair. Who knew? We are from Alabama. We are set, but the clock is ticking. The whole purpose of the event is to get that photo op. We are a long way from our stop, the closest one to the (Sears) Willis Tower with an elevator.

As we are discussing strategy for when we exit, a third angel pops up from her seat and plops next to me. “You’re going to Willis Tower? I work near there.” And she kindly explains which way to walk from our next stop. We are so late now, we must take a cab.

Holding our breath against the olfactory assault in the train (subway above ground for you Alabamians) elevator (and wishing for my boots which are in Laura’s lap); we descend to the street. I step out into the roadway and hail a cab for first time in my life (again, I live in Alabama; a household is incomplete without two cars and a pickup truck). Cab stops, but this is no angel; he shakes his head at the wheelchair, which even folded up, he says will not fit in his cab. Doesn’t even try. We go on. I hail another cab, who also shakes his head at the wheelchair. We push on to Willis Tower afoot and a-roll through the puddles and treachery of cracked sidewalks. We are now very late.

I am pushing as fast as I can until we hit a crack in the sidewalk that stops us dead, shoving the wheelchair handles into me and nearly dumping Laura onto the sidewalk into a puddle because, yes, of course, it is raining.

Willis (Sears) Tower is massive. We enter and proceed via elevator to a winding corridor down to the security station, surely close to our goal, only to find we are at the wrong door and have to be escorted through the labyrinth of the Tower to the service elevators in order to reach 99th floor and the Independent Publisher’s party and awards announcement. We are finally here! We register, pick up our ID’s and a program . . . from which we learn “Historical Fiction” is #15 on the list and they are now announcing #26.

We missed it. All the way from Alabama to Chicago . . . and WE MISSED IT!

I wheel Laura to the bathroom. I feel worse for her, since she really wanted this, and it is as much her award as mine because cover design and layout are also considered, along with the story and writing.

While waiting for her, I notice we are sort of “back stage” to the awards announcer, and a beautiful young woman is standing (on stage) with her back to me, so close I can touch her with one step. She is obviously connected to the proceedings. Hearing one of my father’s oft-repeated lesson’s in my head (Only the squeaky wheel gets the oil.), I take that step and tap her shoulder, whispering that we had difficulties and just arrived, and is there any way we could go out of order? She steps out of the big room where we both can hear each other, and consulting a list, asks my name.

She brightens. “Oh, you are T.K. Thorne? I LOVED your book!”

“Yes, I really loved it; it was my favorite book out of all of them.”

There are 80 national categories. No idea how many submissions in each category or how many she actually read, but that’s a lot of books, even if she meant in my category. As far as I am concerned, I am happy.

But she graciously arranged for us to get called up, Laura hobbling at my side. They put a huge medal worthy of the Olympics around my neck and, to my delight, around Laura’s too. And I have the book in hand! Success! Photo snaps. 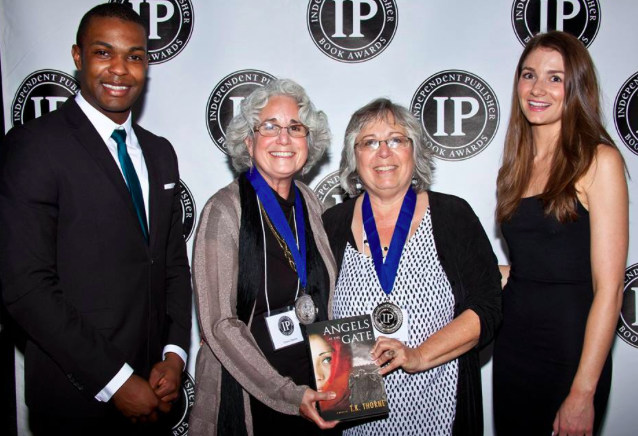 We head to the bar.

View out the Willis Tower, drink in hand

View out the Willis Tower, second drink in hand

Over the next several days we encounter angels and references to them in rather odd ways. In addition to the transit guy named Angel, another “angel” (whose friend is Angela) shows me how to use Uber (yea! no more wheeling for blocks to the train station); the Egyptian uber driver mentions his son’s name is translated as “Angel in Heaven”; a book publicist at the Book Expo America (BEA) advises me to “listen to my angel.”  I keep looking for a flutter of wings out of the corner of my eye! 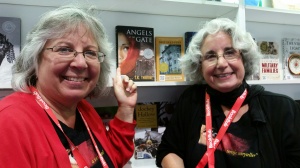 At the IPPY award display

On our last day, Bob picks us up, and we load wheelchair and baggage. After bungee cording his trunk down (not because of our luggage, just normal procedure), we are off to the airport with an extra hour, just in case. It is bitter cold, but I roll down the windows because I can’t afford losing any more brain cells from the fumes. There is so much stuff in this car, it is unidentifiable. I try not to figure out what it is and just hope there are no rodents that live near my feet. I am in the back seat, and I reach for the seat belt. Actually find one, but there’s no buckle, so I just loop it around one shoulder. There’s a chance if we hit something at just the right angle, it might help. Laura is in the front seat. “What’s that noise?” she asks, forehead wrinkled in concern. Is it the engine?

Bob: “Unless the wheels fall off, I usually just turn up the radio.”

I couldn’t make this up.

Postscript:  Despite appearances, Bob was one of the many Chicago angels, for sure. He has spent most of his life traveling around the world helping people in disasters, which is how he and Laura met. I really wish I could spend more time with him and hear his stories . . .  just not in his car.

T.K. is a retired police captain who writes books, which, like my blog, roam wherever her interest and imagination take her.
View all posts by T.K. Thorne →
This entry was posted in Uncategorized and tagged Angels, Angels at the Gate, author, BEA, book award, Book Expo America, Chicago, T.K.Thorne, wheelchair adventure, writing. Bookmark the permalink.