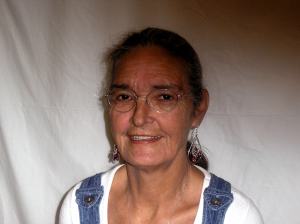 Leaders sometimes appear in unexpected guise. “Grandma” Becky Davis would not have earned a second look had you noticed her on the street. You would’ve seen only a thin homeless woman with stringy, steel-grey hair and a bag on her shoulder. If you looked closer, you might have deduced a dose of Native American heritage in the straight back and the strong cheekbones. Grandma had no income, but the bag she carried held an assortment of food. Everyone on the street knew about her bag. If folks were hungry, they could reach into “Grandma’s” bag. If they had extra, they put something in.

If you followed Grandma “home,” two years ago, you would have found yourself in strange camp on the outskirts of downtown where a few people huddled around a fire. When Grandma grew tired, she bedded down in the shelter of an abandoned tractor-trailer cab. It reminded her of younger days when she drove an eighteen-wheeler across the country. She was also an honorary member of the Hell’s Angels. If you watched her giving another homeless person “what for” for slipping off the wagon, you’d understand that she could still hold her own. No drugs or alcohol were allowed in her camp. She, herself, had been sober for seven years, though she had her vices—smoking and a virulent sweet tooth.

She started drinking after her first husband died. When her second husband tried to kill her, she took a long, hard look at herself in the mirror and realized she was doing the job for him. She left him. . .her home. . .and her addiction to alcohol.

If you saw Grandma on a downtown street in midwinter, you might have wondered why she didn’t stay in a shelter or join her daughter in Georgia. It seemed bizarre that this elderly woman preferred a rat-infested shell of a truck cab to a roof and heat and regular meals. What was true, but harder to understand, was that when you have nothing in the world but the clothes on your back and your ability to make small decisions—when you can come or go; who your companions are; when you eat and sleep—those choices become precious to you. When you have little control over your life, small freedoms define your sense of dignity and self. Grandma’s daughter had her own problems as a single mother struggling to raise three children, and Grandma refused to add to her burdens by revealing she was homeless.

When Hurricane Katrina devastated New Orleans and the coasts of Mississippi and Alabama, an organization in B’ham, CAP,  collected more items than the refugees that landed there needed and started sending donated supplies to the coast. Volunteers from the community came in to help sort and pack. One of them was a thin woman with stringy, steel-gray hair and a bag on her shoulder. She said, “Those people down on the coast have it worse than I do!” And she worked all day and came back the next day…and the next. When the relief operation expanded to a warehouse, she gathered other homeless people she trusted, brought them in, and assigned them duties, but woe unto those who came to our door with any type of scam in their hearts. Grandma did not tolerate fools. Eventually, she earned the warehouse keys and the title of Warehouse Manager. She wore her red “CAP volunteer” T-shirts with pride almost every day for two years, explaining CAP services to anyone who asked …and probably to several who didn’t.

Grandma shared her idea about implementing a transit program she’d encountered where a homeless person looking for work received a two-month bus pass, free of charge. After those first months, if he’d found a job, he repaid the price of the ticket, so another person could use the pass. Sort of like Grandma’s food bag.

It took two years to get Grandma a disability check and housing. With the first income she’d had in a very long time, you might think she would buy herself something, but what she stubbornly insisted on was taking the people who had helped her to lunch.

Despite her years of sobriety, the damage to Grandma’s liver finally caught up with her, and she was in and out of the emergency room many times. To the medical staff’s surprise, the parade of visitors to her room included parking enforcement folks, homeless people, fellow hurricane relief volunteers, and CAP officers. Along with flowers and potted plants, several “illegal” milkshakes somehow slipped through security.

Each time Grandma returned to the hospital, she had to endure painful procedures, but she never lost her spirit. If you could have seen the woman who sat so straight in her bed, her face a road paved with life’s lines, you might have seen the ghosts of Native American ancestors who sat with her. You would understand that courage and determination…and leaders sometimes appear in strange guise.

Grandma knew she was dying. She had income now and could contribute, and she returned to Georgia to be with her daughter and grandchildren. She wanted the youngest to have some memories of her. If you had looked down and seen Grandma during the last days of her life, you would have seen a thin woman with steel-grey hair and a straight back, spending time with her granddaughter, teaching her that if you carry the bag for other people, someone will put something in it and someone will take what they need from it.

T.K. is a retired police captain who writes books, which, like my blog, roam wherever her interest and imagination take her.
View all posts by T.K. Thorne →
This entry was posted in Grandma's Bag and tagged Homeless, Katrina, Native American. Bookmark the permalink.