Did Jesus Have a Wife? 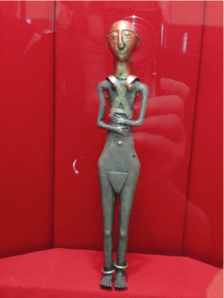 Did Jesus have a wife?

I live in the Deep South where it is customary to hear prayer “in Jesus’ name” at city functions.   Many people here are startled at the idea that anyone could actually have different religious views.  Not that this attitude is at all mean-spirited; it is just an assumption.  Meanwhile, a new discover has stirred the pot! An ancient (4th Century) fragment of Egyptian Coptic parchment has emerged.  On it are just a few tantalizing words—“Jesus said to them, my wife…”  Of course, it is not “proof” of Jesus’ wedded state, only evidence that early Christians believed Jesus was married, as the blockbuster novel The DaVinci Code postulated.

Personally, I don’t find this shocking at all.  Every Jewish mother wants her son or daughter to get married.  On top of that, it turns out that God also had a wife.  I stumbled upon this revelation doing research for my novel, Noah’s Wife.  I set the story at the time of a great flood of the Black Sea, which is likely to have been the inspiration for the Biblical story of Noah and the ark.  According to geologists, that time was 5500 BCE.  The culture of the area (ancient Turkey) at that time included the worship of both god and goddess.  In fact, the Mother Goddess remained an important figure in the Middle East for thousands of years.  Early Hebrews worship included her, even inside the Temple in the holiest place in Judaism!  Archeologists are finding ancient pottery inscriptions that say “Yahweh and his Asherah.”  (Asherah was a Canaanite goddess, who was the wife of “El.”)  It appears there was a systematic “erasing” and redacting of the story (which had never been written down before), when the Hebrew priests blamed their expulsion from Israel and the destruction of the Temple on worship that included the goddess.

History is what those who write it say it is… until evidence emerges that makes us rethink the past.  For a long time, it was absolute “gospel” that the universe revolved around the Earth.  So, if Jesus did have a wife, what does that mean?

Postscript: “Now after more than 18 months, scientists from Columbia, Harvard and MIT have reported that, in the words of the New York Times . . .  ‘The ink and papyrus are very likely ancient and not a modern forgery.'” — Hershal Shanks “First Person” in July/August 2014 issue of Biblical Archeology Review

T.K. is a retired police captain who writes books, which, like her blog, roam wherever her interest and imagination take her.
View all posts by T. K. Thorne →
This entry was posted in Did Jesus Have a Wife? and tagged Jesus wife, Noah movie, Noah's Wife. Bookmark the permalink.

7 Responses to Did Jesus Have a Wife?