What No One is Talking About 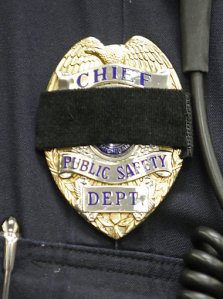 Two of New York’s police officers are dead, executed by a gunman. I can’t seem to find the words to express my sorrow for the families, my gratitude to the officers who put their lives on the line for us all every day, and my desire to find some meaning in all this. Perhaps in a few weeks, I can write about it, but for now, I’ll post the thoughts I had about the Ferguson incident and a viewpoint no one was talking about.

As a police officer for over two decades, I have walked in the shoes of the officers who daily take risks that most people can’t begin to imagine unless they have served as a law enforcement officer or in military combat duty. While thousands of voices are raised in protest against police, we have heard little from their perspective.

Police officers rarely volunteer to talk to the media. Why? To start with, the perception of their job makes public relations difficult. Their focus is on preventing or solving a crime, not PR. Also, for many, experience has given them a cynical belief that their words or meaning may be twisted or taken out of context. For the same reason, they are suspicious of civilian review panels, which officers believe do not and cannot understand the dangers and expectations of carrying a gun and badge and going boldly where others do not wish to tread.

So as a general rule, (there are, of course, exceptions), police officers are not comfortable with articulating their feelings and viewpoints to anyone outside of the “brotherhood.” Talking to a civilian, even in a social setting, about police work is a sure path to engendering a litany about that person’s past “wrongs” at the hands of police.

Another problem is that the media usually wants to talk about an ongoing criminal investigation. In the recent Ferguson case, for example, the public was outraged that the police department did not share details of the case. Regardless of whether the department handled everything in the best manner, officers risk the investigation when they give out information. Many witnesses have to be uncovered. For a variety of reasons, witnesses don’t necessarily step forward and their veracity is compromised if details are made public. Even if law enforcement hears misinformation from the media, they are very circumspect about responding. An investigation takes time and in our 24-7 news-and-talking-heads world, people want answers now.

There is no doubt that in places people’s civil rights are being abused or not appropriately respected. There are examples of horrendous acts by a minority of law enforcement, abuses of power that should not and cannot be allowed. As a resident of Birmingham, Alabama and a student of civil rights history, I know great sacrifices were made to establish civil rights in this country, and I understand that although we have come a long way, we have not accomplished the healing we would hope for.

But Michael Brown is no Rosa Parks, whose agenda was to peacefully protest an unjust law. There is no doubt that, in the early part of the encounter with Officer Wilson, Brown attacked the police officer. For those who find this hard to fathom, in 2013, officers were the victims of almost 50,000 on-duty assaults. “Of the 27 officers feloniously killed (47 died in line of duty), six were killed in arrest situations, five were investigating suspicious persons or circumstances, five were ambushed, four were involved in tactical situations, four were answering disturbance calls, and two were conducting traffic pursuits/stops. One was conducting an investigative activity, such as surveillance, a search, or an interview.” (FBI Statistics 2013).

These were officers involved in carrying out their everyday duties. Where is the outcry over that? You will not hear it, and officers know that. The responsibility for protecting themselves falls on their shoulders, and they know that too.

Something else they know: According to a Bureau of Justice Statistics report, “Firearms claimed the lives of 92% of the officers killed in the line of duty from 1976 to 1998. The officer’s own gun was used in 12% of all murders of police officers.” [Italics mine.]

Put yourself for a moment in an officer’s shoes. What do you suppose your chances of survival are if an assailant gets your gun? They are slim. What happens to other people who are now subject to violence at the hands of a criminal with your gun? You must guard that gun at all costs. That includes an unarmed assailant with the intent to get it. You can’t wait for him to get close enough to take that decision away from you. At a certain point, when you have reasonable fear that a person’s approach is with the intent to assault you and take your weapon—demonstrated in this instance by the prior attack and the fact that a man you have ordered to stop and have even shot is continuing toward you—you must act. Gunshots do not always stop an assailant. That is why police are trained to aim for center mass—their best chance of stopping someone. Officer Wilson was backing away when he fired. No training made him do that. He was in fear for his life.

I am not black. I have not walked in those shoes. I am asked, however, to understand or try to understand the perspective of the black community who feel that they are not seen as human beings worthy of respect or treated equally by the criminal justice system. That is hugely important and there are certainly steps we should take and support to get there, but it is a two-way street. One of the first things I learned in law enforcement was to recognize the ongoing balance between freedom (civil rights) and security. We often gain one at the risk of losing the other. What would happen if we took guns away from police officers? On the other hand, if car and body cameras help reduce law enforcement abuses, we should use them. If we need to reinvigorate the concept of community policing, we should go there. If we need to address poverty and the relationship between education and school dropout rates and crime, we must do that. All parents, black and white, should instruct their children how to behave when interacting with law enforcement, understanding that police officers are never sure who or what they are dealing with.

We may never have a perfect world, but as Gloria Steinem once said, the answers for our society are “not about a piece of the existing pie; there are too many of us for that. It’s about baking a new pie.” The primary ingredients of that pie must include mutual respect and understanding.

T.K. is a retired police captain who writes books, which, like her blog, roam wherever her interest and imagination take her.
View all posts by T. K. Thorne →
This entry was posted in What No One is Talking About and tagged Ferguson, killing of police officers, New York, police, police shooting, shooting. Bookmark the permalink.

5 Responses to What No One is Talking About