Have you ever tossed and turned in bed, unable to sleep because your mind was wildly bouncing from thought to thought? One of those thoughts being, Why can’t I stop thinking? What an interesting thought, your mind says. How can “I” stop thinking? Am I not my thoughts?

I’ll skip to the answer:  No. “You” are not your thoughts.

The way to that conclusion is deceptively simple, yet life changing.

I wonder if the whole practice of meditation came about because of some woman’s difficulty sleeping thousands of years ago. Yes, I know men take credit, but, according to the latest science, women’s brains are more active than men’s. Women multitask and use more parts of the brain, leading, interestingly enough, to the fact that they need more sleep than men. Their brains get more tired.

They can also get stuck in thought buzz-land. Men too, of course.

Meditation is a practice of being still physically and watching mentally. It is becoming deliberately aware of the “I” observing the thoughts. Each time one arises, you recognize it and put it aside. You are not so much stilling the thoughts as finding the Watcher. She is elusive. If you stop paying attention, she slips away and seems to loose herself in the thought, to become the thought.

What is the point?

Just as in sports, you train muscles, in meditation practice, you are training the muscle of your mind. Don’t get me wrong. The thoughts that arise are not unimportant. Your subconscious is a power house that you can channel, something I wrote about in 3 Steps To Engage The Secret Smartest Part of Your Brain. What arises from your subconscious can be significant and powerful or it can be trivial. It can be contradictory, emotionally loaded, or an idle worry. Your subconscious is as much a part of you as your lungs or heart, but a thought is its product. It is not “you” the watcher, you the decider. It is not “thinking” that distinguishes us from most of the other life on this planet, it is the awareness of thinking.

In our culture, we are not taught to distinguish between the thought and the watcher-decider.

Here’s what. If we think—I am the worst wife/mother/sister that ever was—and make no distinction between the thought and the watcher-decider, we give that thought enormous power. It is just a thought! You could have also have thought—I am a big banana. 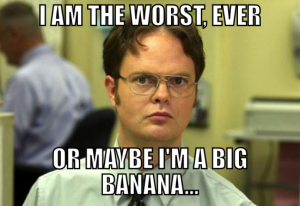 What is the difference?

Vive la différence, my friend. You are not a big banana. Or a little one, for that matter. Thoughts populate for many reasons. There is a lot of electrical activity going on in the brain. Our brain developed, not to be the most precise or effective instrument for many tasks, but to be creative. Our success in survival is an outgrowth of that ability:

The possibility of creativity (which meant survival in evolutionary terms) arises when two or multiple disparate ideas collide, i.e., our subconscious brain is designed to be a high-energy-let’s-try-this-and-that-together, kind of place. It is such a wild environment (pay attention to your dreams if you don’t believe this) that an “I” monitor arose to make decisions. This “I” can get in the way sometimes. It is not needed so much when a tiger appears. Decision to Get Out of Dodge is made on a more basic level. The being who stops to ponder about tigers and life gets eaten.

But the “I”-monitor/watcher-decider, plays an extraordinarily important role. As a writer, what I do with a creative idea is as critical as having one. Some ideas need to be discarded. An idea is not sacred. A thought is not necessarily true. You are not a big banana. You are probably not the worst person on the planet either. It is just a thought and you are free to have another one, such as, I am the best that I can be at the moment. Or I made a mistake. It’s not the end of the world. Or I wonder why I am beating myself up over something stupid?

You can let go of anger because you can have angry (or whatever) thoughts, but you don’t have to keep them. You can even change them, because they are not “you.” They are just thoughts. This tiny, subtle distinction can literally change your life.

And maybe help you sleep.

I live on a beautiful mountain and write about whatever moves me while two dogs and a cat vie for my lap. I’m a retired police captain and eclectic writer. I'd love to hear from you! TKThorne.com
View all posts by T.K. Thorne →
This entry was posted in Uncategorized and tagged emotional thinking, meditation, RET. Bookmark the permalink.

3 Responses to One Simple, Life-Changing Thought