The Whirling Dervishes of Cappadocia 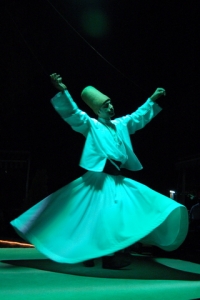 Tell me how wonderful I am or I will strike you with lightening, cause your fields to lie fallow and your women to be barren!

Why would an omnipotent God, or even powerful gods, need to be praised? It seems an egomaniacal, neurotic demand. “Praise” has never a comfortable concept for me. But twice in my life, experiences have shifted my understanding. The first was in a room of believers who raised their voices in spontaneous musical “praise,” each individual contributing whatever he/she felt moved to create. Somehow, all that miscellaneous individualism coalesced into a glorious harmony. To compare it to even the best choral performance would be like trying to pass a piece of glass as a diamond.

The second came unexpectedly in Cappadocia, Turkey, where I was privileged to sit on the front row and see the famous Sufi Whirling Dervishes. Contrary to the spontaneous singing, this was a scripted, formal service and yet… Well, let me start by saying I was expecting men in white robes and funky hats to spin around in circles like children, but without the dizziness. And, after a solemn introduction of chanting and music—wooden flute, a stringed instrument, and drums–that is exactly what I saw, and yet…not at all what I saw.

They entered the dimly lit square area beneath a domed ceiling, stately figures covered in black, their tall, cylindrical hats representing tombstones, a reminder that life is a whisper on eternity’s wind. Each knelt and bowed, sitting quietly for a while. Then one by one, they stood, shed the black cloaks and began to turn, hands crossed on their chest to represent the oneness of God, the weighted hems of their snowy robes lifting. After a moment, their arms rose as though gravity no longer claimed them, caught in the vortex of the whirl like filaments of spider silk in a gentle waft. One hand cupped upward, filling with the vibrancy from above, the other down to the earth, symbolizing the dervish’s position as conduit between both. There was a moving simplicity in their spinning, a reflection of the elemental nature that lies in the indescribable smallness of the sub-atomic and the unimaginable vastness of space. The whirl of energy’s essence; the spiral arms of a galaxy.

In some mysterious way, the audience became participants in the dervishes’ peaceful, joyful state. This was worship…but the word is flawed. It doesn’t convey the fact that praise is not the Holy’s need, but ours–our need to connect to that which is both beyond ourselves and the essence of our true selves, to recognize that our skin is only the most temporary container.

To maintain that awareness for an extended period of time, as whirling dervishes, yogis, or monks do, takes a great deal of practice, but such intensity is not a requirement the Universe imposes. Nor is the phenomenon of a spontaneous melding chorus. All that is needed, I think, is that we lift our focus from busyness and recognize any of the countless moments that wait for us everywhere–moments of the holy, moments of praise.

T.K. is a retired police captain who writes books, which, like this blog, roam wherever her interest and imagination take her.
View all posts by T.K. Thorne →
This entry was posted in Whirling Dervishes and tagged Turkey, whirling dervishes. Bookmark the permalink.

4 Responses to The Whirling Dervishes of Cappadocia