The Honeysuckle War: A Survival Story 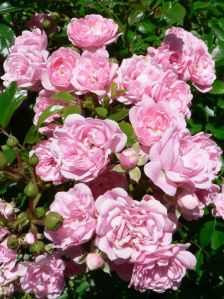 A one-armed elderly man I knew long ago gave me a rosebush. To call it a bush was a stretch—-three thorny sticks attached to a ball of dirt. I planted it in the yard along the pasture fence and forgot about it.

It grew. I was hardly a good shepherd, basically leaving it to live or die on its own. Profusions of delicate pink blossoms rewarded my neglect. The rosebush and I did our own thing as the years passed, unaware of a growing menace. It crept from the pasture, just a green background at first and then suddenly, without warning, the honeysuckle vines invaded, wrapping over and around the rosebush, smothering it. There was little I could do, as the other side of the fence was a hillside too steep to bush hog, protected by masses of thorny blackberry bushes.

It saddened me to see the roses smothered. I felt helpless. What kind of person was I to let my roses die? Yet, I like honeysuckle too. To breath in its presence is to inhale the summer’s prelude; to pull a drop of nectar onto my tongue sweeps me back to barefoot wanderings, to days of magic unraveling without care of time. It wasn’t the honeysuckle’s fault; it was just doing what honeysuckle vines do. The world is like that.

For a couple of years, I missed seeing the rich fountain of spring and summer roses and figured the rosebush was dead. It had its day, as do we all.

Then one year, I noticed a thorny spike thrusting through the mass of honeysuckle like a drowning man raising one arm above the water. Not dead. But no flowers. I’d almost rather it just went down and stayed down than to have to watch this.

The next year, a few more spikes appeared.

Well, good for you, stubborn old rose bush. Never give up. Who knows? Maybe it doesn’t have to be roses vs. honeysuckle; maybe they can coexist, find a peaceful way to drink the same sunlight and flourish.

Indeed they did. Not only is my fence line a mass of intoxicating blooming roses and honeysuckle this spring, but the strangest thing has happened. There, in the the sea of satin pink and honeysuckle gold, thrusting up and over in a delicate arch is a tendril of blood red roses! What? I never planted red roses there. Did a bird drop a seed into the dark mass of honeysuckle vines? Did a section of my pink bush somehow revert genetically?

I don’t know. I’m treating it as sort of a miracle, a message—maybe from my one-armed friend—to never give up, to remember that out of darkness and conflict and not having things come easily, a beautiful, unexpected thing can happen.

*This year (2018) a hot pink rose was added to the mix! Recently read about mosaicism or “bud sports” which says that we may all have variant DNA in different cells and might explain this.

T.K. is a retired police captain who writes books, which, like her blog, roam wherever her interest and imagination take her.
View all posts by T. K. Thorne →
This entry was posted in How a Rose Bush Changed My Life. Bookmark the permalink.

9 Responses to The Honeysuckle War: A Survival Story