The Word That Led To The Charleston Church Massacre 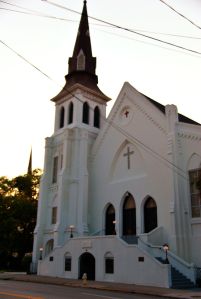 What happened in the mind of a man who walked into a church bible study and killed nine people? How did things get so twisted in that mind? Does society have any role or responsibility? Do I?

The tragedy in Charleston is unprecedented only in the number of people killed. From the 1963 bombing of the 16th Street Baptist Church in Birmingham, Alabama, to the beating of parishioners in a Mississippi church, to multiple arsons from Louisiana to Michigan (both past and current), acts of racial violence and terrorism have not been strangers on sacred ground or anywhere else.

As a retired law enforcement professional, I’ve encountered the dark side of humanity up close and on more occasions than I could have ever imagined. Here is what I have learned: the line between good and evil, citizenship and chaos, sanity and insanity is far thinner and more fragile than we imagine.

Two things motivate the human mind: 1) what we need and 2) what we believe. What we need is basic and universal. Beyond food, water, and shelter, we need to feel that our life has meaning and significance. For people who have a mental break from reality and hear voices, the voice they hear is most often not the grocer down the street—it is “God’s.” For the paranoid, they are the object of focused governmental attention, the center of a conspiracy. Our earliest motivators are to have our parent’s approval at best and, at the least, their attention. We need to feel that we matter.

What we believe and remember is shaped by many factors and subject to change over time. Reality is a subjective function of the brain and mind, which take input and then reorganize and interpret it. For example, the actual visual image that enters our eyes is upside down, but our brain flips it so we “see” it right side up. How often do we “flip” ideas and information so it fits into our world-view?

We don’t perceive the atoms in the chair on which we sit or the vast spaces between them; it all appears solid, though, in reality, it is not. But it works to see it that way, therefore, as far as our minds are concerned, it is solid and we can sit in it. How often do we ignore ideas and information that don’t fit into our world-view?

To external eyes, the shooter at the Charleston church had quit his job and was living a pretty aimless existence, but what was churning in his mind? At some point, he began to filter reality, to form, see, and hear only what fit into his world-view.

“‘Y’all are raping our women and taking over the country,” he said to the people at the Bible study. “This [killing] must be done.”  In his mind, he was acting logically, even heroically, in accordance to what he believed and what he needed, i.e., to feel that his life was meaningful and significant. And that required the incorporation of a concept that can be expressed as “other.”

The distinction between “us” and “them” is a basic human value, perhaps shaped by evolution, certainly by culture. “Us” is first our family, then our clan, our tribe, our region, our nation. “Other” is whatever is not “us.” This belief is the foundation of all prejudice, hate and radicalism, as well as the foundation of love. “They” are not “us.” “They” might not even be human. In WWII, the allies’ enemies were “Japs” and “Krauts,” not human beings. Hitler and the Ku Klux Klan defined Jews, Catholics, and blacks as less than human, and once that is believed, it is not a long jump to justifying anything, from snobbery to bullying to genocide. It is a thin line that can be crossed with a mental step.

On the other hand, when compassion and wisdom make “them” a part of “us,” interesting things happen. Kindness and respect born of embracing otherness is a language understood across the world and across worlds. So how do we keep our children and ourselves wary of strangers (“There is a time for war and a time for peace. . . .”) and yet open to strangeness?

It is neither possible nor desirable to do away with distinctions or diversity. The bonds of family will always be unique. We naturally tend to spend time with those we perceive share our values and culture or history. There is nothing wrong with that, but the more positive contact with have with “others,” the less real their otherness becomes and the more possibilities exist to connect and include differences in the “us.” We cannot be held hostage by awful acts of hatred. Positive contact is our responsibility. We must seek it and teach it to our children—by traveling, by reading, by reaching out to “others,” by listening, by cultivating an openness of mind that is also critical and questioning. We must make conscious choices whether to remain in our conclaves of “us vs. them” or to expand our world.